The Curious Cases of DCIs Grant and Paddington

Rating: A tiny fragment of one star. 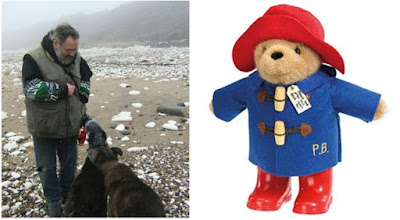 A remarkable new detective series will launch next season. Get the “tellies” ready for the BBC 13 production of a new series of not-so-riveting detective dramas: The Curious Cases of DCIs Grant and Paddington.


The series features a supposed collaboration over several cases between Yorkshire DCI J. L. Grant (also purported to be a writer of sorts, having published some church pamphlets and micro stories about a donkey from Hell) and DCI Vera Paddington of Newcastle who, most strangely, needs to be posted from place to place via Her Majesty’s Postal Services, her father’s ancient Land Rover having broken down.


Of course, such a collaboration is unlikely to the extreme. But the first episode, “The Wetwang Connection,” goes some way to explain how it might happen.


The premise of the debut is that a gang of not-so-intelligent scoundrels are smuggling both coal and black market cigarettes to Tyne-side from Wetwang, and so both Grant and Paddington become involved. Scotland Yard has refused to join in the investigation because they have rightly stated that such a criminal activity is “not in our purview, let alone being beneath our dignity”—and, essentially, to “sod off.”


One interesting element of the story that should be mentioned, is that Grant’s two lurchers, with the oddly Americanized names of Django and Chili are transported in the back of a Mini-Cooper stationwagon (much to their cramped discomfort) to some of the scenes of the purported crimes.


Both hounds seem to be as completely disinterested in the two DCIs' invetigations as the viewer will almost certainly be. But they do the best job of acting in the series—in this reviewer’s opinion.


One final note before I pronounce my overall opinion on this doomed project. Since ALL of the actors—“stars” (and that term is used absolutely loosely) and supporting cast speak either various dialects from Yorkshire, Newcastle, or Scots the BBC will subtitle the episodes into standard English—especially for the American audience, which they see as the most likely group who just might enjoy these farces. One BBC official said: “Bloody Hell! If they can elect that complete twit to be their president, they might just fall for anything!”


The decision to use subtitles rather than dub more standard English or American English over the characters’ lines (as ridiculous as they are—who writes this crap anyway???) is that it would be, first of all, too costly, and secondly, to reach the network’s level to be overdubbed requires that more than 50% of the lines be virtually unintelligible to the average English speaker—and only 47.2% of the lines were so found.


I cannot recommend in the slightest the viewing of this pig of a series, but the Fragmentary Star is due to the dogs being a bit cute and worth a look—at least check out episode one for their brief antics of complaint about being cooped up in the Cooper, and their hilarious taking of a nap while on leash and supposedly looking for clues.


Overall: a tiny fragment of one star—Coals to Newcastle, indeed.